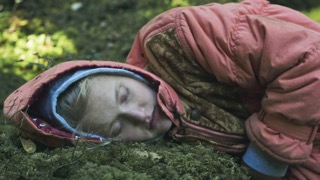 Two free spirits hang about in a forest in
the northern parts of Sweden. When one of
them suddenly disappears and the other one
encounters a hunter who might seem a little
fishy, the story takes off for an exciting venture
of power, fear and prejudices. Who is it that
sets the rules of the game?

SOPHIA BÖSCH (SWITZERLAND, SWEDEN)
moved to Sweden in 2008 to learn Swedish, her
grandmother’s language. She has studied Cinema
Studies, written and directed several shorts and
worked as assistant director on multinational
productions. She is part of the feminist film
collective Lillemor Film, made up of Anna
Warfvinge (producer), Sophia Bösch (director)
and Isabel Herlöfsson (cinematographer).