A family shattered by an unspoken illness lives somewhere in the British rural areas. Moira (played by the legendary singer-songwriter Beth Orton) can no longer live at home due to psychological and physical reasons. Her husband flees the situation, leaving their three children to themselves most of the time. Ewan tussles with the compulsive fear of inheriting his mother’s illness while Ramona loses herself in a passionately fabricated love story.
When their younger sister Rose wants to go and visit their mother at the hospice, nobody joins her. In the end, she opens the door, goes out and tries to find her way by herself. To her mother but also back to her family.

Esther May Campbell’s feature debut is an opalescent kitchen-sink stylized family portrait, full of emotion and a poignant, poetic eulogy for a lost parent. What happens when someone close is physically present but no longer mentally reachable? Like stars that are light years away and visible yet long gone. 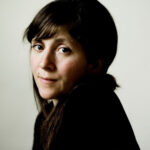 ESTHER MAY CAMPBELL
Esther May Campbell (UK) is a self-taught photographer and film maker. She has directed low fi music vids, sex education films as well as Channel 4 dramas and the BBC’s Wallander. Her captivating cinema stories tell of
lost souls, tragic lovers, limbo lives and daydreamers, all found in her selfpenned short, the multi awarded and BAFTA winning September as well as in her feature debut Light Years.