Four different characters are all awake during
the same night, in different places, for different
reasons. The night makes people restless, or
it makes people face whatever it is that keeps
them awake. 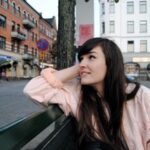 BELLA BRYNGELSON (SWEDEN) is a writer
and filmmaker living in the south of Sweden.
She has studied filmmaking at the Skurup folk
high-school of film and at Malmö University
where she currently studies Creative writing.
Restless Legs Restless Hearts is her second
short film.