Small feet tiptoe in the grass in the Småland summer night. They will do anything not to be heard. No one will ever know. This will always be their secret – the children’s and the father’s. The film is based on a true story about two children who were not allowed to meet their father.

The film will be introduced by the filmmaker Caroline Eriksson. 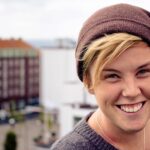